Much of this information comes from the Michael Olaf Montessori Company. They publish two catalogues that are also excellent overviews of Montessori philosophy and practice. The text from these publications is available free on the Internet. For information see their links to:

The Joyful Child, Birth to Three Years & Child of the World, Age Three to Twelve at www.michaelolaf.net

If you need more reference material, please visit our Links section for other sites of interest.
MARIA MONTESSORI, MD
(1870-1953) 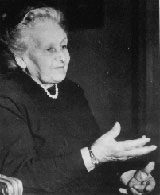 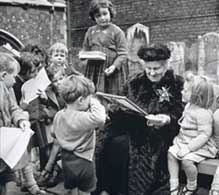 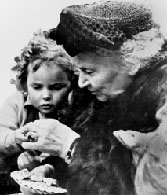 THE WOMAN & HER METHOD

Just who was this woman who began an educational revolution that changed the way we think about children more than anyone before or since?

Maria Montessori, born in 1870, was the first woman in Italy to receive a medical degree. She worked in the fields of psychiatry, education and anthropology. She believed that each child is born with a unique potential to be revealed, rather than as a “blank slate” waiting to be written upon. Her main contributions to the work of those of us raising and educating children are in these areas:

Maria Montessori was always a little ahead of her time. At age thirteen, against the wishes of her father but with the support of her mother, she began to attend a boys’ technical school. After seven years of engineering she began premed and, in 1896 became a physician. In her work at the University of Rome psychiatric clinic Dr. Montessori developed an interest in the treatment of special needs children and, for several years, she worked, wrote, and spoke on their behalf.

In 1907 she was given the opportunity to study “normal” children, taking charge of fifty poor children of the dirty, desolate streets of the San Lorenzo slum on the outskirts of Rome. The news of the unprecedented success of her work in this Casa dei Bambini “House of Children” soon spread around the world, people coming from far and wide to see the children for themselves. Dr. Montessori was as astonished as anyone at the realized potential of these children:

Supposing I said there was a planet without schools or teachers, study was unknown, and yet the inhabitants – doing nothing but living and walking about – came to know all things, to carry in their minds the whole of learning: would you not think I was romancing? Well, just this, which seems so fanciful as to be nothing but the invention of a fertile imagination, is a reality. It is the child’s way of learning. This is the path he follows. He learns everything without knowing he is learning it, and in doing so passes little from the unconscious to the conscious, treading always in the paths of joy and love.

FROM EUROPE TO THE UNITED STATES

Invited to the USA by Alexander Graham Bell, Thomas Edison, and others, Dr. Montessori spoke at Carnegie Hall in 1915. She was invited to set up a classroom at the Panama-Pacific Exposition in San Francisco, where spectators watched twenty-one children, all new to this Montessori method, behind a glass wall for four months. The only two gold medals awarded for education went to this class, and the education of young children was altered forever.

INDIA and THE NOBEL PEACE PRIZE

During World War II Dr. Montessori was forced into exile from Italy because of her antifascist views and lived and worked in India. It was here that she developed her work Education for Peace, and developed many of the ideas taught in her training courses today. She was twice nominated for the Nobel Peace Prize.

In Rome Dr. Montessori developed the Montessori program for the elementary years for the child from 6-12. She began, as elementary classes do today, with the required curriculum of Italy of her time. She adapted the traditional teacher-taught subjects in the arts and science so that the children could use materials to guide their open-ended research and to follow their individual interests, working to a much higher level than was previously (and is presently!) thought possible for children of this age. The elementary child, when allowed to work independently instead of being taught in groups led by a teacher, and in classes with a mixed age group of 6-12- year-old students inspiring and teaching each other, masters academic subjects usually not taught until middle or high school.

Montessori had many ideas for the child at this age. For information on this age level see: Montessori 12-18

THE MONTESSORI ASSISTANTS TO INFANCY PROGRAM

In the 1940’s, inspired by the amazing potential of children realized in the early years, Dr. Montessori stated that age three was too late to begin to support the work and development of children. In 1947 the Montessori Assistants to Infancy program was begun in Rome. This was a 3-year, full-time program which is still taught today in several countries. For an overview of Montessori work at this age, see: Montessori 0-3

Since her death an interest in Dr. Montessori’s methods have continued to spread throughout the world. Her message to those who emulated her was always to turn one’s attention to the child, to “follow the child”. It is because of this basic tenet, and the observation guidelines left by her, that Dr. Montessori’s ideas will never become obsolete.

Many people, hearing of the high academic level reached by students in this system of education, miss the point and think that Montessori math manipulative (as an example) is all there is to the Montessori method. It is easy to acquire materials and to take short courses to learn to use them, but the real value of Montessori takes long and thorough training for the adult.

The potential of the child is not just mental, but is revealed only when the complete “Montessori method” is understood and followed. The child’s choice, practical work, care of others and the environment, and above all the high levels of concentration reached when work is respected and not interrupted, reveal a human being that is superior not only academically, but emotionally and spiritually, a child who cares deeply about other people and the world, and who works to discover a unique and individual way to contribute. This is the essence of real “Montessori” work today. 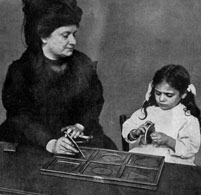 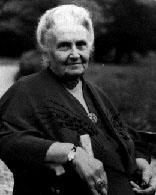